Proudly rich in tradition: all to be discovered!

Most people know it thanks to the Fidenza Village, but Fidenza is not just the “small capital” of the outlet and shopping. How many travellers and pilgrims, from the Middle Ages on, have stopped here! A small city, I agree, but it had its own bishop and the title of city since 1601. For at least a thousand years it has been called Borgo San Donnino, from the name of its patron saint to whom the Cathedral itself is dedicated: come and discover it, together with the Diocesan Museum, it is worth the trip! Fidenza is a fundamental stop on the Via Francigena and the Via Emilia, it overlooks the plain, the so called “Bassa Parmense”, but also the hills of Parma and Piacenza. 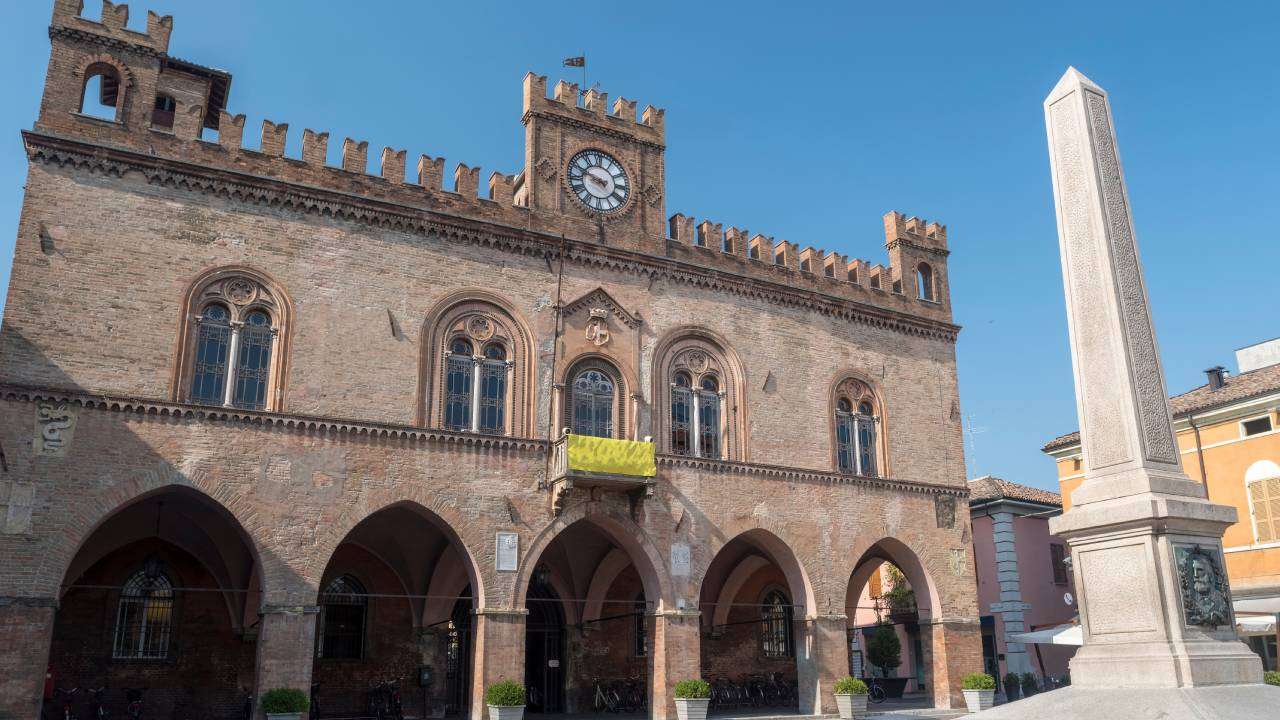 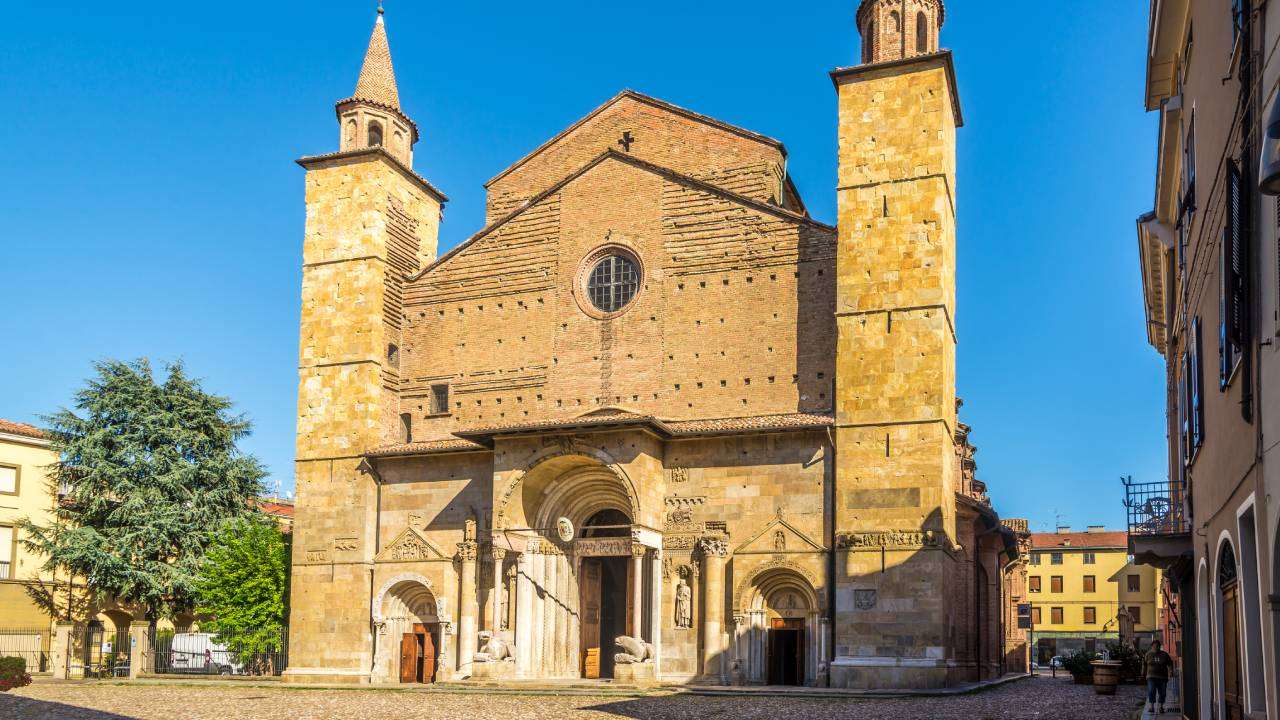 In fact, the two major cities fought for it: Parma won, in the end, but Fidenza strived to maintain its own identity and cultural dignity. In addition to the historic center, in its territory you will find beautiful destinations such as the Stirone and Piacenziano Natural Park, the MUMAB (Museum of the Ancient Sea and Biodiversity), important parts of the Via Francigena, the spa area of ​​Salsomaggiore and Tabiano, the “Terre Verdiane” (Giuseppe Verdi’s lands), the Labirinto della Masone and a quantity of restaurants, trattorias, farms, local delicacies producers: you can taste and take home the best of the best. Listen to your guide, pack your bags and come to Fidenza!

It has been for centuries the capital of the State of the Pallavicino Marquises and the Emperor Charles V even proclaimed it a city in 1533. So, Busseto is extremely proud of its past: just take a stroll in the historic center and you will get it immediately! In such a small area you can find Piazza Verdi with the Rocca, housing the Town Hall and the beautiful Verdi Theater, Casa Barezzi, dear to the memory of Giuseppe Verdi, and then one of the most important libraries in the land of Parma, some churches that preserve masterpieces such as Guido Mazzoni’s “Lamentation over the dead Christ”, museums dedicated to Verdi’s opera and to great opera singers such as Renata Tebaldi… and more! Even today, Busseto means love for music and good food: magical shop windows along Via Roma can prove it! 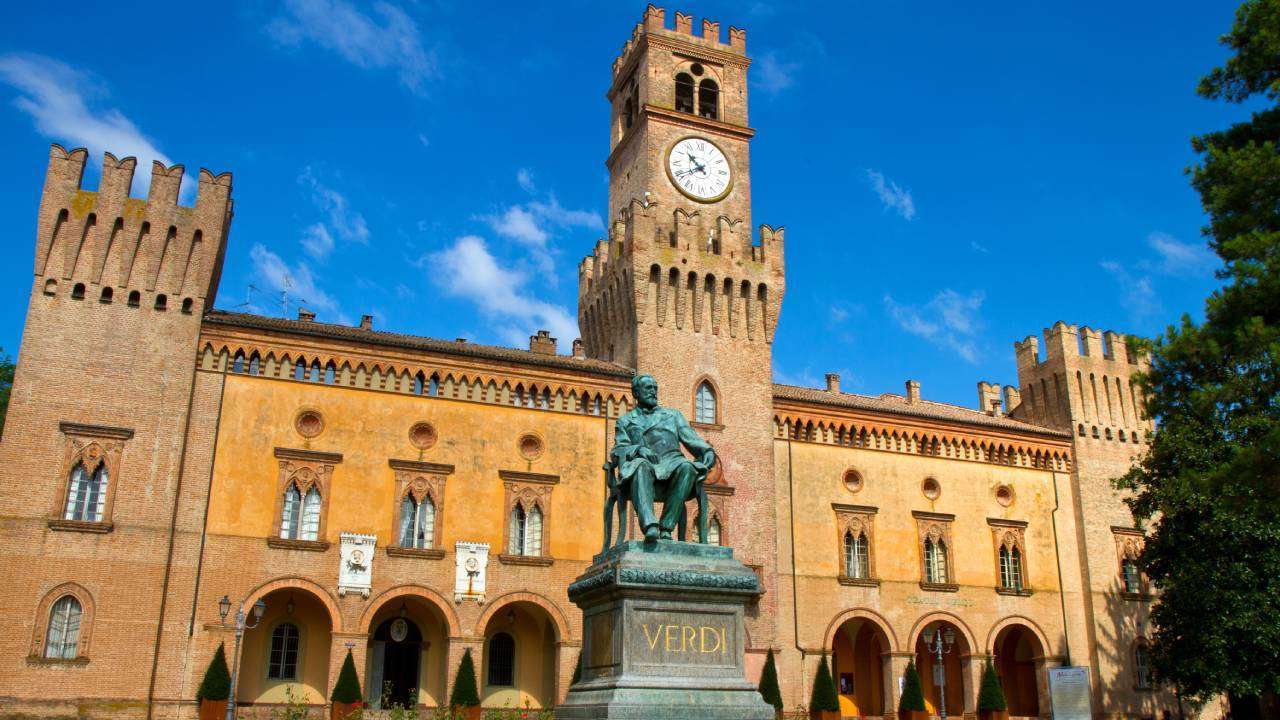 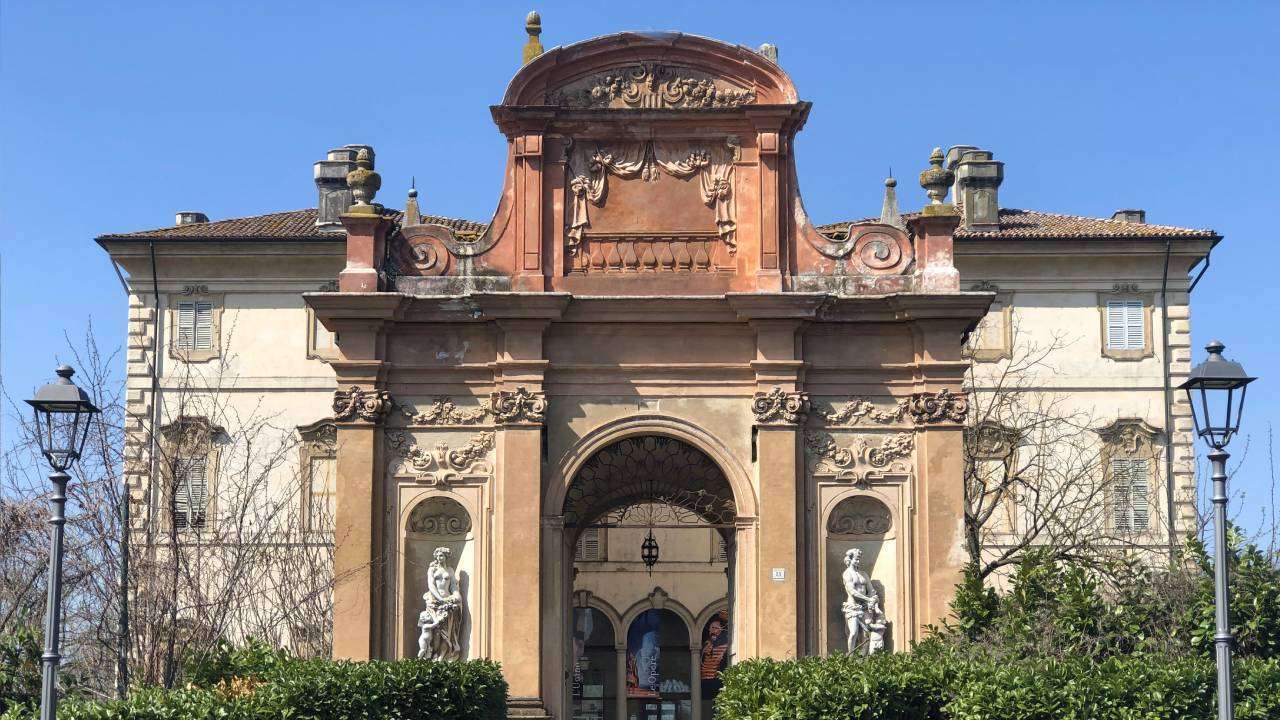 Being the heart of the “Terre Verdiane” (Verdi’s Land), despite the somewhat … tormented relationship with the Maestro (an intriguing story, which I will tell you for sure!), it invites you to head on to Roncole Verdi and Villa Sant’Agata, where Verdi is a living presence, and discover the many wonders of the “Bassa”: Polesine Parmense, Zibello… By the way, do you know the secrets of the Culatello making? Would you like to know more about? You are in the right place then! And don’t forget the magic of the Great River, the Po, flowing nearby. What if we embarked for a nice boat ride?

Why visit Salsomaggiore Terme? Because if you love Art Nouveau-Déco style, here you can admire a masterpiece like the Terme Berzieri (Berzieri Baths), which will leave you speechless. Art Nouveau has really imprinted this charming town, which was, not surprisingly, a capital of thermal tourism … and feminine beauty as well: so many editions of Miss Italia contest took place here! Along the squares and streets many Liberty style buildings and decorative items still give you emotions. And the precious waters and therapies in Salsomaggiore and Tabiano Baths keep their virtues intact. 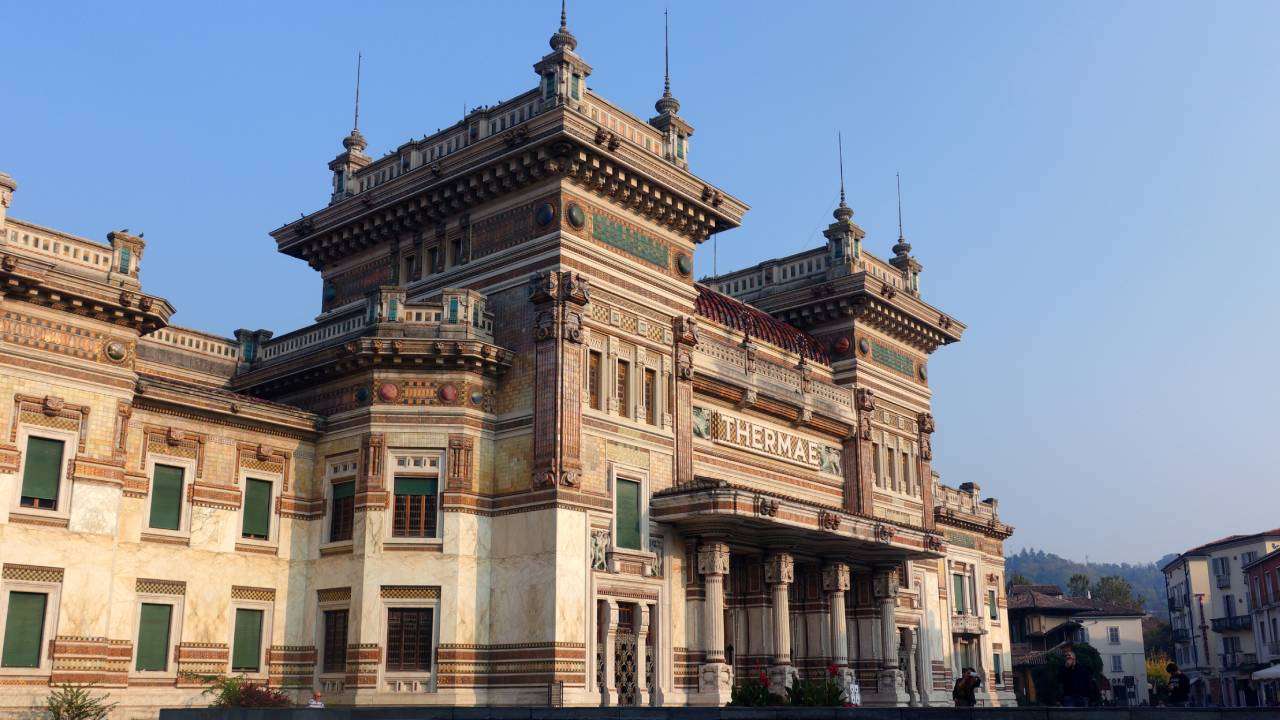 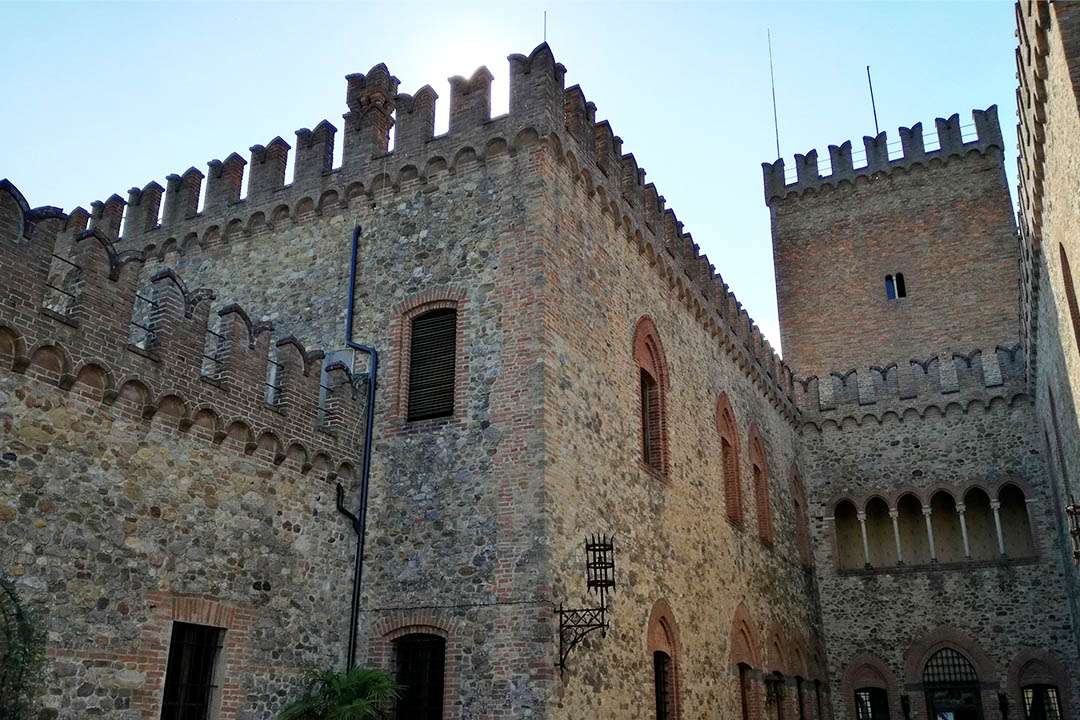 But the whole area is beautiful, being so rich in pleasant hiking and bike itineraries: you will enjoy history, art, nature, botanic gardens and their precious products, good wine, excellent gastronomy: top ingredients for a stay dedicated to well-being and relax. In these hills and plains, there are so many wonders to be discovered! Fidenza and its land are the closest, but also cities like Parma and Piacenza and a number of wonderful villages and castles: all within easy reach. Your tourist and hiking guide has no doubts: here you have all the chances to spend a “total wellness” holiday!

In the land
of Reggio Emilia

Welcome to Correggio, home of the painter Antonio Allegri, genius of the Renaissance: an Italian glory… and very Emilian! Antonio made his greatest masterpieces in Parma, but he has always remained very close to his city: not for nothing is he famous as “il Correggio”. And how to blame him? Walking through these beautiful arcaded streets and squares is a pleasure. The Da Correggio counts and princes made it a small, welcoming capital of the Italian fifteenth-sixteenth century: they enriched it with villas, churches, majestic palaces. The power of this great family made its influence felt all the way to Parma! 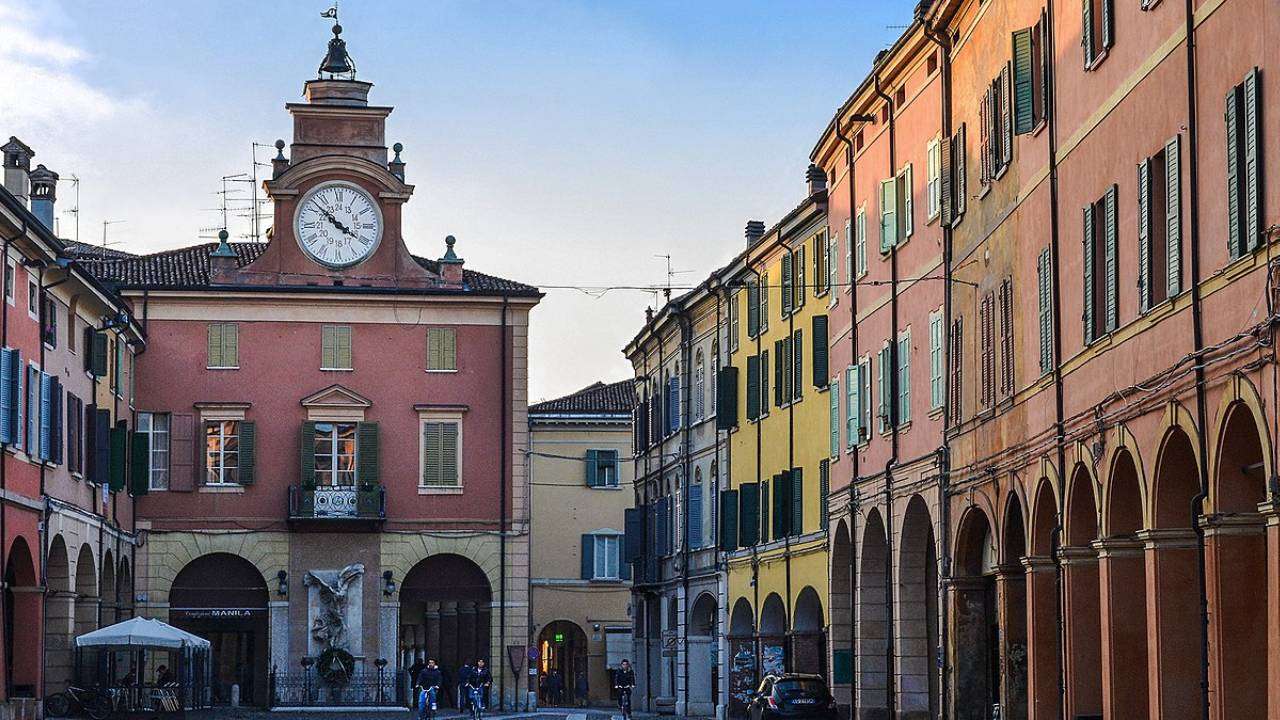 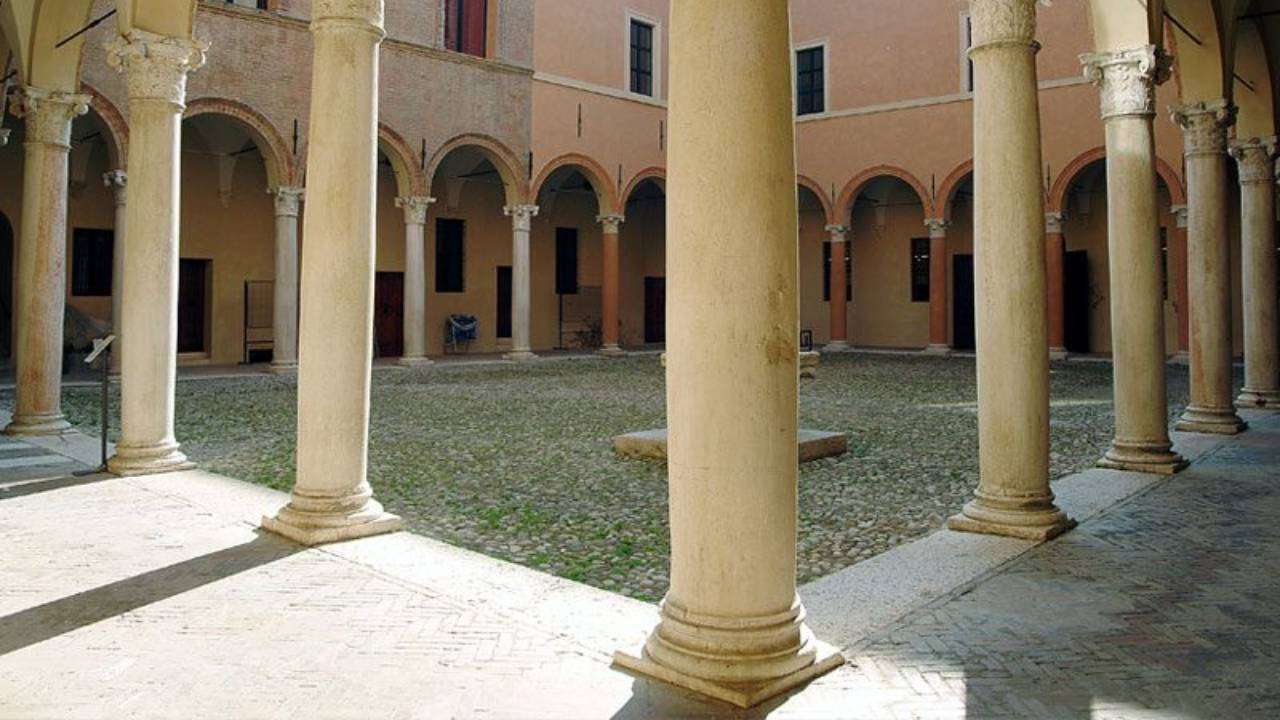 The Borgo Nuovo keeps its Renaissance layout and the entrance arch to the Palazzo dei Principi gives us an idea of ​​the court’s life standards. But it’s so pleasant to stroll down the Borgo Vecchio as well. Right where Antonio Allegri lived, the Casa del Correggio houses an info point, a large documentation center and many initiatives, shared with the “Il Correggio” Museum in the Palazzo dei Principi. A museum full of surprises, in beautiful settings, where you can admire, among other works of art, a spectacular collection of tapestries. The Asioli Theater is also a gem and has a nice activity. The historic center is no short of beautiful things to see and do! Last but not least … you can find the right places where you can taste high quality food. A destination not to be missed!

An imposing plain fortress in the heart of a small city-state: between the waters of the valleys, here is Novellara with its fortress. Governed for centuries by a branch of the Gonzaga family, it has grown little by little, between swamps and mists that no longer exist, controlling the Mantuan trade to and from the Po river. The Rocca Museum tells its history and above all the the most glorious period, the sixteenth century, when architect and court painter was a magnificent artist, Lelio Orsi. In the Rocca (and nearby) there are also other beautiful, surprising … and tasty things. 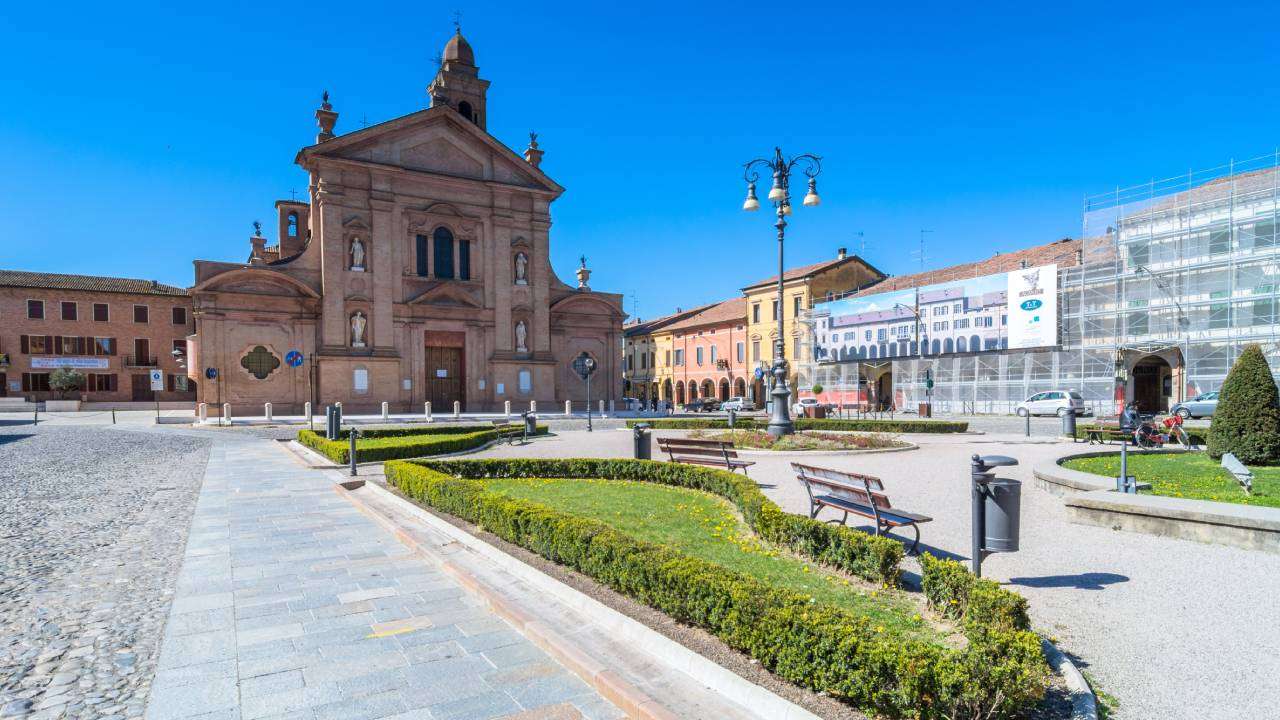 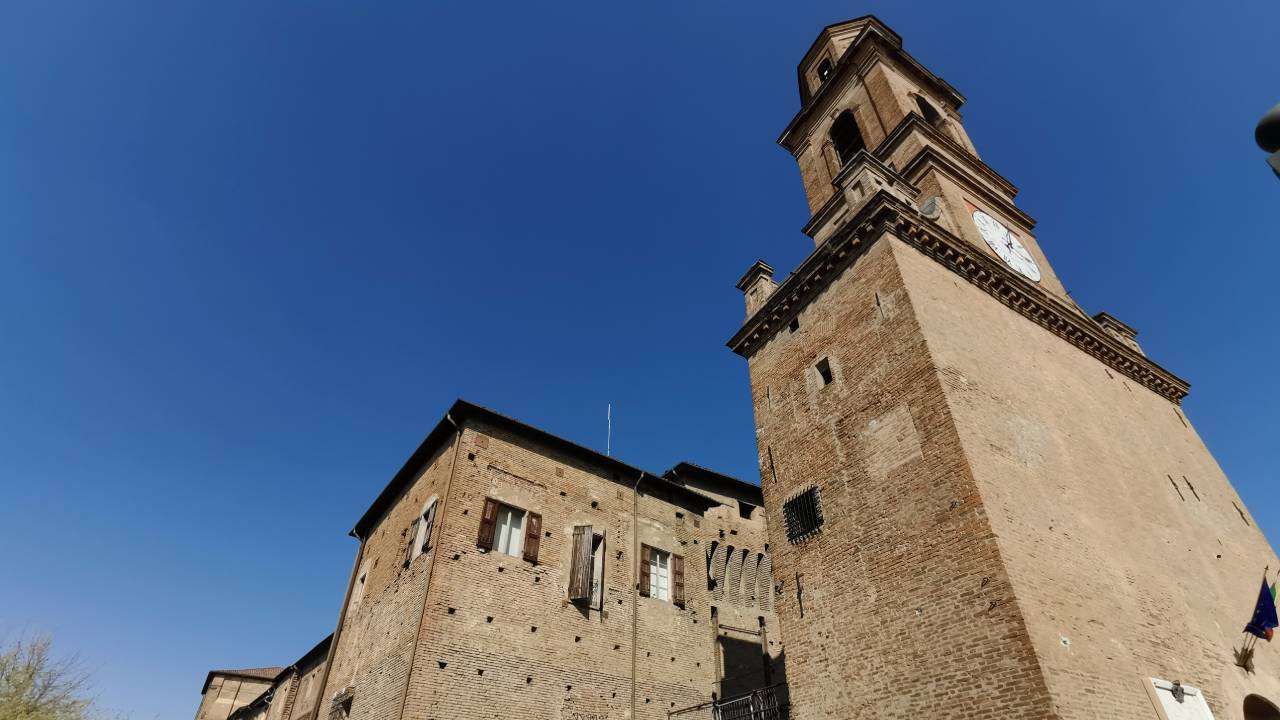 We will discover them together! I only anticipate that the Tagliavini Theater is also located in the Rocca: a beautiful and “miniature” version of the Municipal Theater of Reggio Emilia, it is very active and so much loved by the city community. How nice t get strolling in the sixteenth-century village, so well designed, and then get to Piazza Unità d’Italia, vast and lined with arcades, with the Collegiate Church of St. Stephen in the background! Novellara is airy, harmonious, on a human scale. Not far away, the Rocca di Reggiolo, the Rocca Estense of S. Martino in Rio and the Rocca dei Boiardo of Scandiano are designed to be amazing: these small inhabited centers, still important today, have a magnificent past. Word of guide, this area really deserves a stop!

Here we are in Guastalla, queen of the Reggio “Lands of the Po”: the Great River is just a stone’s throw away. Usually, we remember Guastalla as “associated” with the Duchy of Parma and Piacenza: in fact, it was part of it for over eighty years, between the eighteenth and nineteenth centuries. But its moments of glory are much older! Since the fifteenth century it has been the capital of a county and then of a duchy, which has lived at least two centuries in full autonomy. Mantua, Reggio, Parma, all its neighbors had to deal with Guastalla! Great families, such as the Torelli and above all the Gonzaga, have made it strong, beautiful and perfectly equipped as a “real” italian city: first of all the Palazzo Ducale, but also the Civic Tower, the Theater, the many important churches in the historic center and in the surroundings. 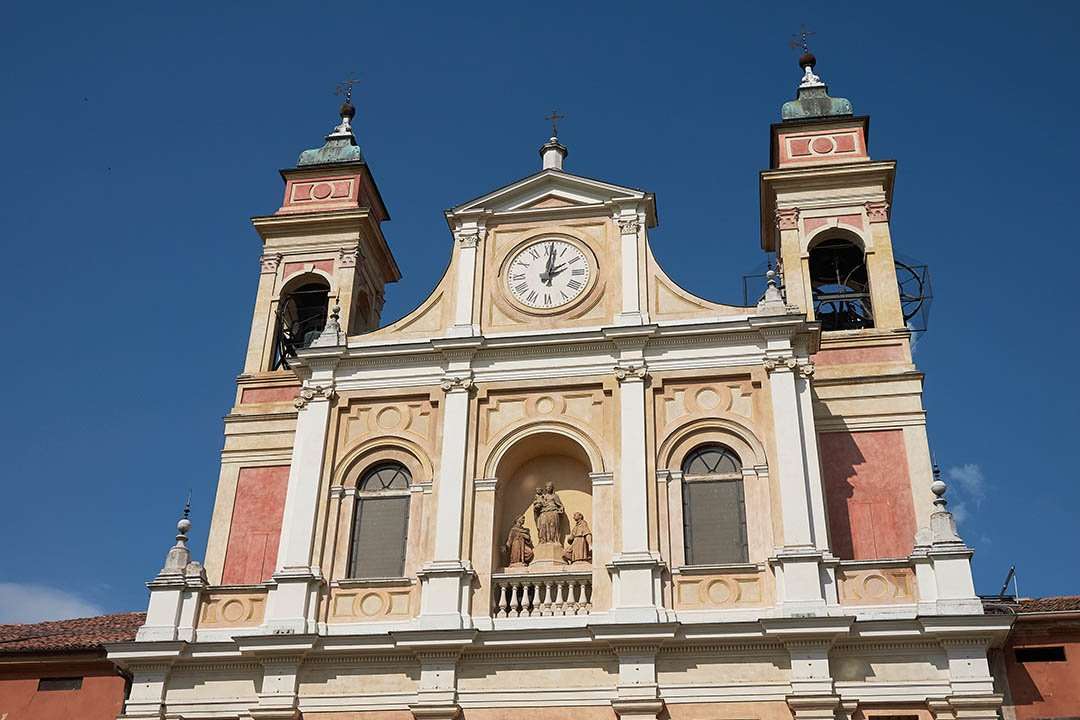 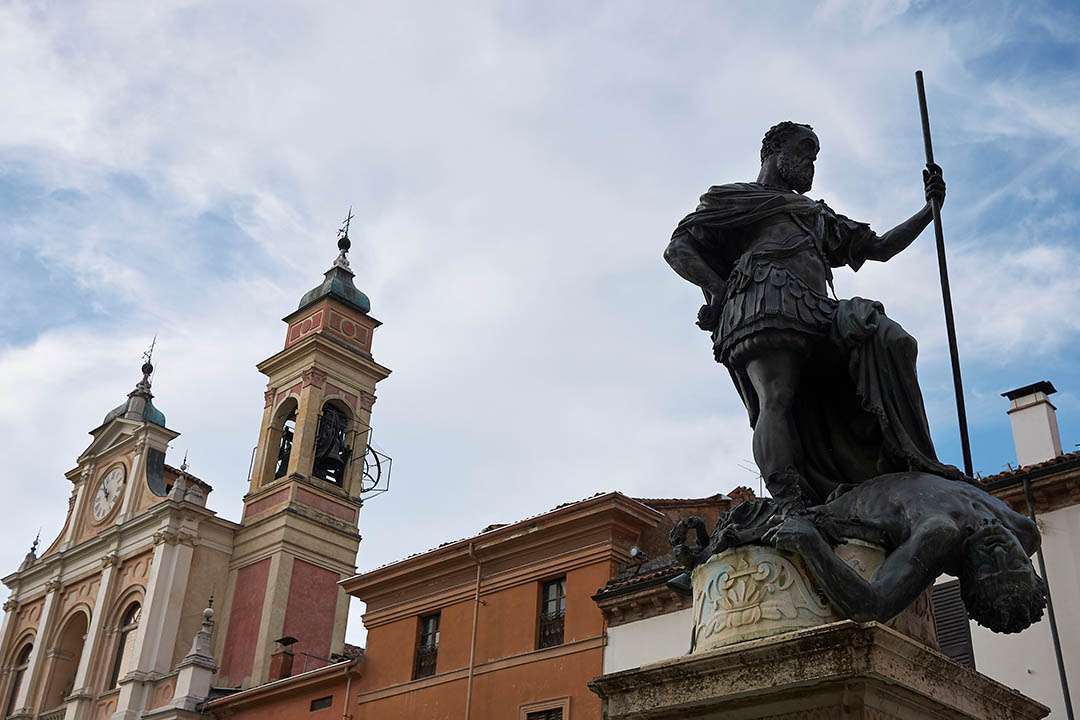 Even today, the Co-Cathedral of St. Peter the Apostle reminds us that for a century and a half Guastalla had its own diocese and its own bishop (which it now shares with Reggio Emilia) and played an important role in the religious history of the area. The Maldotti Library is also an ancient and authoritative institution. Director Bernardo Bertolucci has taken some glimpses of the city in his film “Novecento” and that’s right: Guastalla also represents very well the strength of traditions, peasant struggles, a “Po Valley” story that fully concerns it.

Shall we go overboard with a “coups de théâtre”? Let’s go to Gualtieri then, an ancient village on the banks of the Po river. In 1567, Duke Alfonso II d ‘Este donated it to his lieutenant, the noble Cornelio Bentivoglio, to reward his commitment in the reclamation of the lower Reggio Emilia  land. Thus, it became a real… micro-capital! The court architect, Giovanni Battista Aleotti, who knew much about theatrical and scenographic effects (he desiged the fabulous Teatro Farnese in Parma!), invented an amazing square, bounded by the church of S. Maria della Neve, the Civic Tower, the mighty Palazzo Bentivoglio and… the bank of the Po! Entering it from the arch of Via Vittorio Emanuele is an exceptional view. 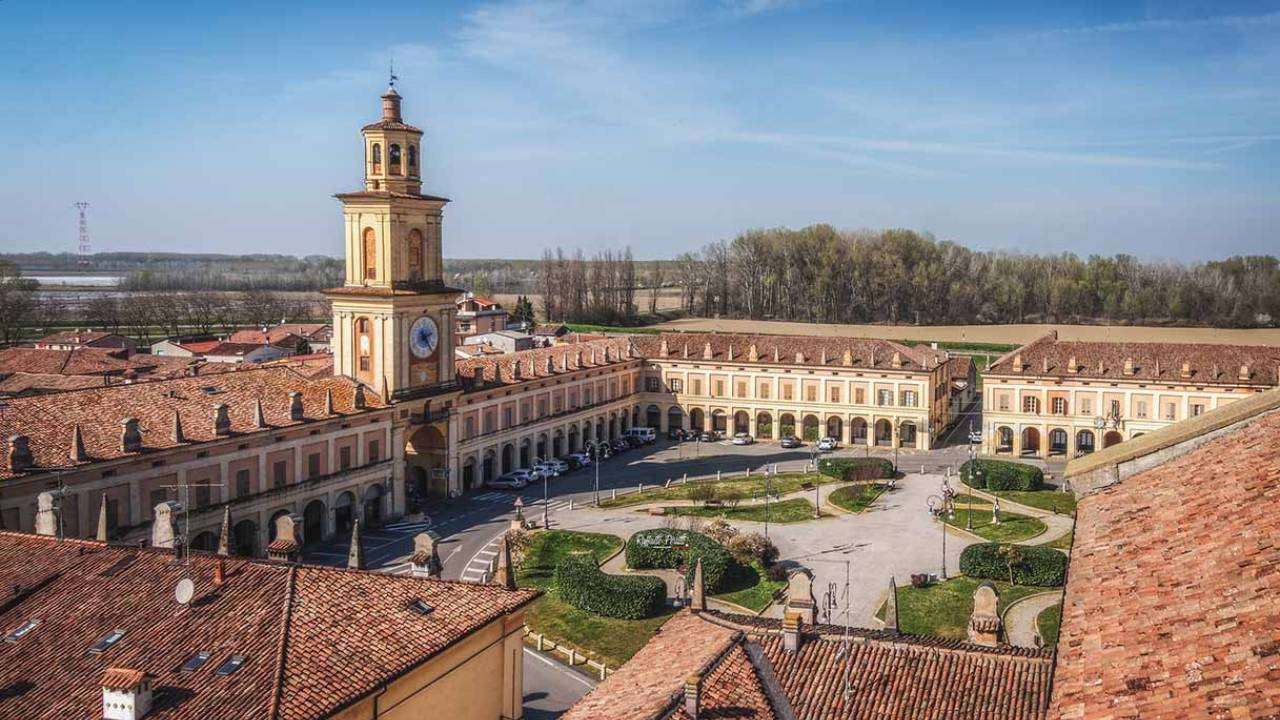 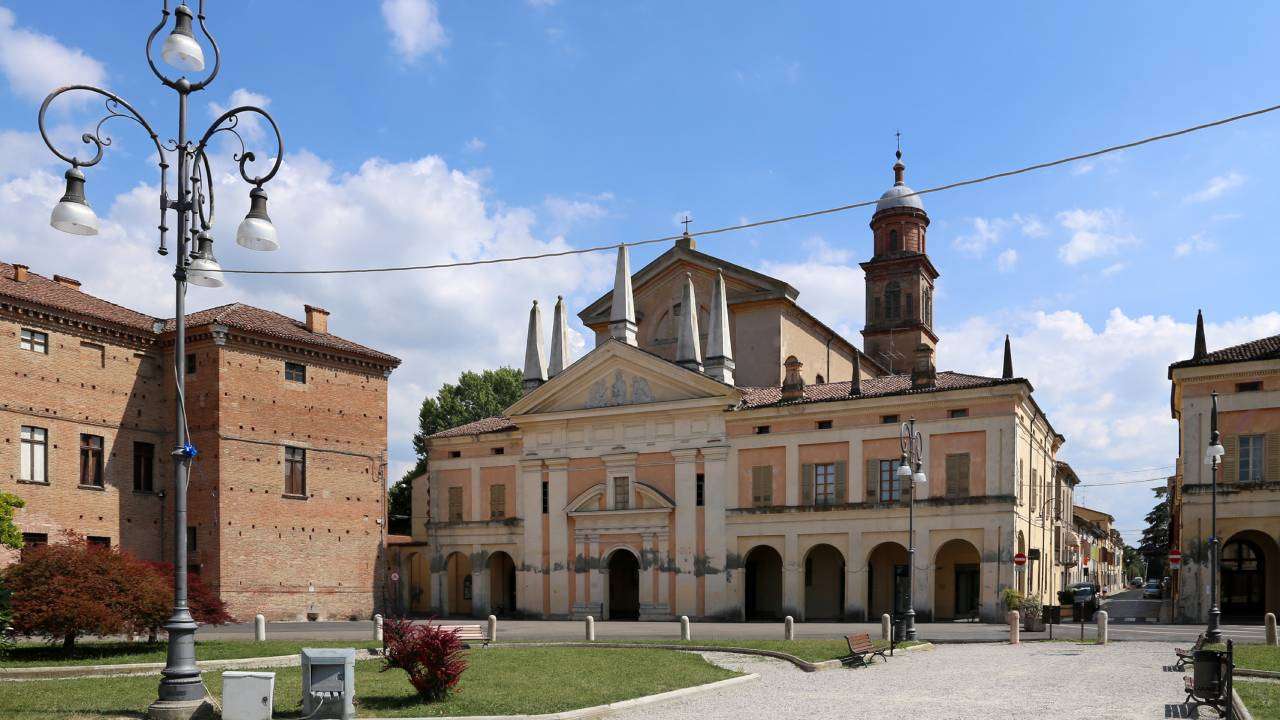 Not for nothing, Gualtieri is one of the Most Beautiful Villages in Italy! In the palace, a large museum is dedicated to Antonio Ligabue, the most important Italian naive-expressionist painter, who lived in Gualtieri for a long time, painted a lot and even ended his life. If we want to deepen the topic, a few kilometers away in direction of Mantua we can stop at the Museum of Naïves Arts in Luzzara, the birthplace of the director and writer Cesare Zavattini. If instead we go to Parma, we find Boretto, the historic port on the Po, and Brescello, which in addition to its very interesting ancient history, is famous all over the world as a film set: thanks to Don Camillo and Peppone, the characters created by Giovannino Guareschi and turned into hugely successful films by Julien Duvivier. I also talk about it in “Passions and itineraries”. Not to be missed!